Has your situation ever seemed hopeless?  Have you done all that you know to do and the end result seems unchangeable?

Let me tell you a little story about a guy named Peter. 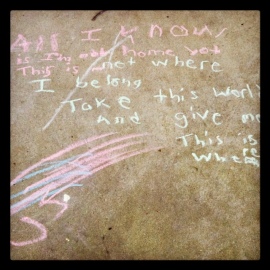 We are told in Acts 12 that James had been killed.  This pleased the Jews so greatly that Herod decided to kill Peter as well.  Peter is now in prison awaiting his fate.  It must have seemed, to Peter, to be a pretty hopeless situation.

Hopeless situations cry out for a powerful God.

Here is what you need to know about your seemingly hopeless situation.

It doesn’t matter how dire the circumstances appear.  We are instructed to pray without ceasing.  When we pray, things happen in unseen places.  Peter’s fate seemed sealed and, yet, constant prayer was being offered on his behalf.

No matter where you are right now: in prison, in pain or in the midst of a personal crisis, the Lord is right beside you.  Just imagine the angel of the Lord walking into that prison with Peter and standing guard. He was just waiting for the appointed time to break those chains. Can’t you imagine the Lord watching over Peter and saying…Just wait.  Hold on.  I’m right here and I’m about to do something big.  Don’t give up.

…he did not know what was done by the angel was real, but thought he was seeing a vision. – Acts 12:9 NKJV

Sometimes, you have to remind yourself that you serve a God who never slumbers nor sleeps. He is always at work in your life and in your circumstances.  The angel had to instruct Peter to put on his shoes and to put on his cloak.

Haven’t there been days like that? Those days when you feel incapable of doing even the basic necessities of life?  When you’ve thought I can’t do it anymore.  I’m just tired. Yet, you manage to get up and get dressed and do what you need to do.  In those instances when you don’t know how you are still able to put one foot in front of the other – it’s Him prodding you along. Okay, Beloved, put your shoes on.  Don’t forget your lunch.  It’s going to rain later, so you should grab your umbrella. All those times, you thought you were making it on your own and you wondered when God was going to show up…

When he had considered the thing.  You know, the whole was-in-prison-but-an-angel-set-me-free…thing.  It wasn’t until Peter was safely away from the prison and began to ponder upon what had happened that he then realized that it was the Lord that had delivered him.

Sometimes, you pray fervently for something that does not happen. Often, it is only after some time has been allowed to go by that you are able to see that the Lord was at work.  You’re often too overwhelmed by the situation at the time, but later…when you can look back and consider the thing…you will find that the Lord was faithful.

…he declared to them how the Lord had brought him out of the prison… – Acts 12:17 NKJV

Your deliverance is not just for you.  You must share your story with others.  You must proclaim liberty to the captives and freedom to the prisoners (Isaiah 61:1.)  While you celebrate what God has done for you, there are those still bound. There are those who don’t realize that there is a God who is able to break the chains and set them free.

Never be ashamed to tell your story. Someone desperately needs to hear it.

*Repost from the archives

One thought on “It is Never Hopeless”