I watched a news show once where people were being asked whether or not they believed in Satan. Over and over again, people said that they did not believe in a Satan or devil. Maybe it’s because I’ve gone to church my whole life, but that shocked me. Many of the people were not doubting the existence of evil. How could they deny evil while living in this world that we live in? What they found impossible to believe, however, was that there was this devilish cartoon character with a pitchfork seeking to cause trouble.

As I sat watching that show, I kept thinking that Satan must be loving it. He may be clever but he isn’t creative. He has been using the same old bag of tricks for years. One of his most affective tactics is to convince people that he doesn’t even exist. Or, if he does exist, that he is nothing more than this red creature who sits on your shoulder encouraging you to eat that second piece of cheesecake. {The second piece of cheesecake, by the way? Do it. Life is short and cheesecake is good.} Satan wants us and our children to view him as a cartoon character.

I’ve been reading in Job and I have always found chapter 1 fascinating. One of the first things we are told about Job is that he rose early each day to pray for his children and that he did so continually. Then, almost immediately, we are taken to this scene in heaven. The sons of God are gathering before the Lord and we are told that Satan came among them. He just inserts himself right in there. Talk about an uninvited guest.

The Lord asks Satan, “From where have you come?”

Satan answered the Lord and said, “From going to and fro on the earth, and from walking up and down on it.” – Job 1:7

We have an enemy, y’all, and he walks among us. To and fro. Up and down. On the earth. Why? What is his purpose in walking to and fro? Is he just observing? Maybe he is just a curious sort of fellow?

Be sober-minded; be watchful. Your adversary the devil prowls around like a roaring lion seeking someone to devour. – 1 Peter 5:8

How diligent would we, as moms, be in our prayers for our children if we fully grasped the reality of Satan? How more willing to rise early like Job would we be if we 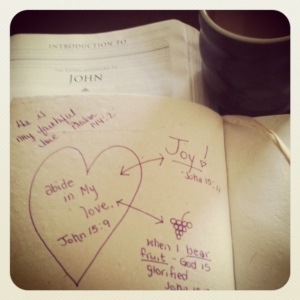 understood that the enemy is walking among us? How continual would our petitions be if we knew that evil itself was seeking someone to devour?

I tend to be a worrier. {My husband would consider that to be the understatement of the century.} Most of my worries involve my children. I worry about illnesses, heart breaks, and mean girls. I worry about what kind of world they will have to live in as adults. I worry that there is some terribly important lesson that I’m forgetting to teach them – like when it is and isn’t appropriate to wear leggings. You know, the really important stuff. Sometimes, I find myself feeling calm and, then, I worry that I’m forgetting about something that I should be worrying about. In my efforts to cover all of the bases, I think I have taught them that all dogs are bad {sorry if you’re a dog lover} and that every stranger is the boogie man.

Call me crazy but, maybe – just maybe – worrying isn’t the best use of my time. Maybe, like Job, I should be rising early and praying continually. Because our babies need our prayers far more than they need our worries.