Sometimes, we focus our eyes on the visible.  We get all caught up in our circumstances and forget that we 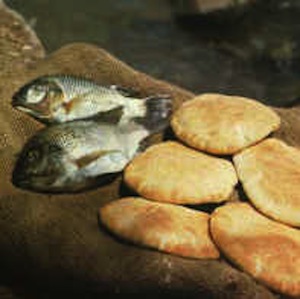 serve a mighty God whose power knows no limits.  We look at the problems around us and decide that they are insurmountable.  Even the disciples were guilty of underestimating God.

These men had been following Christ.  They had listened to His teachings and witnessed His healings.  Yet, when it came to feeding the multitude before them, they were quick to consider it impossible.  They looked at the crowd, looked at their food supply and concluded that it would never work.

There are a couple of lessons to be learned from this passage.

This massive crowd had been following Jesus for three days and He knew they were hungry.  It doesn’t say that they complained to him about their hunger.  They didn’t moan and groan about the lack of food.  He just knew what they needed.

For your Father knows the things you have need of before you ask Him. – Matthew 6:8 NKJV

Even the disciples would often forget…

The disciples said to Him, “Where could we get enough bread in this desolate place to fill such a crowd?” – Matthew 15:33 HCSB

How ridiculous.  They were seated next to God Himself, looked at the circumstances and basically said, “Nothing can be done here.”

That sounds ridiculous, but don’t we do the same thing?  Look around, God.  This is my situation and there is no solution in sight.  How can any good be found in this desolate place in which I find myself?

God is not just enough…He is more than enough.  He doesn’t just take the edge off the pain or hunger…He completely satisfies.  When God fills our cup…it overflows (Psalm 23:5.)  And, when He feeds us, we are filled.

They all ate and were satisfied. Afterward the disciples picked up seven basketfuls of broken pieces that were left over. – Matthew 15:37 NIV

I love that there were seven baskets of food left over.  He could have provided just enough.  He is God, after all.  He knew exactly how much each person could and would eat.  But He made sure there were leftovers.

Sometimes, God doesn’t just show up.  Sometimes, He flat out shows off.  Not for Himself, but for us. He knows that there are times when we need a reminder of the bigness of our God.

15 thoughts on “God Can Feed a Multitude”