The children of Israel.  It is so easy to be critical of them.  Those of us with the advantage of knowing the whole story sometimes lack empathy for their situation.  We are just amazed that they would have the audacity to complain when they’ve just been rescued from slavery in Egypt.

God has brought them out of their bondage and is leading them to the Promised Land.  Yet, they grumble.  They thought it would be easier.  I’m sure they never imagined the journey would be so long.  On many occasions, they express a desire to return to Egypt.  My favorite being:

…Who will give us meat to eat?  We remember the fish we ate so freely in Egypt, the cucumbers, the melons, the leeks, the onions, the garlic…   – Numbers 11:4-5

You would have thought they had been living in paradise with a never ending buffet of culinary delights.  What about the hardships?  The beatings?  The slavery?  These folks pleaded for God to rescue them.  Begged for relief from the burden of their slavery.  Now?  The first sign of discomfort and they’re begging to be sent back.

I must say I was somewhat convicted.  I could totally be one of them.  It didn’t matter if they were in Egypt or with God Himself on the way to the Promised Land…they were going to focus on the negative.  For crying out loud, they were eating doughnuts.  Hey, I don’t make this stuff up…

The manna looked like small coriander seeds, and it was pale yellow like gum resin. The people would go out and gather it from the ground. They made flour by grinding it with hand mills or pounding it in mortars. Then they boiled it in a pot and made it into flat cakes. These cakes tasted like pastries baked with olive oil.  — Numbers 11:7-8 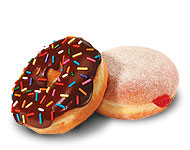 God gave them pastries to eat as they made their way and they complained.  I don’t get it at all.

Actually, I do.  It’s so easy to forget how good God is to us.  I had a disappointment this week.  I found out something I thought was going to happen isn’t…at least not in the way that I thought.  So, I was hurt…disgruntled.  I found myself focusing on the negatives…actually, negative – singular…just this one thing that I wanted.  Then I heard a song on the radio…

Who am I…to understand your ways?   Who am I…to give you anything but praise?

And it occurred to me…God owes me nothing.  Nothing.  That thought doesn’t anger me.  It totally humbles me.  God has given me so much.  I have two healthy children.  I have a home and a job.  I have a husband who thinks I’m fabulous.  I have great friends.  I’m at a point in my life where I think I’m closer to God than I have ever been.  He has given me so much…and I dare to complain.

God is so good.  Beth Moore says that, when anyone asks how they can pray for her, she always tells them…Pray that I will be madly in love with Jesus, because that is my heart’s desire.  I understand exactly what she means.  I have had so many people praying that I would get this one thing…something I have described as the desire of my heart.  But, no.  That is not what I want anymore.

If anyone is going to pray for me…I want them to pray that I would love Him like no other.  I want my life to be a testimony of His goodness and grace.  If people feel sorry for me because I did not get something or because He answered ‘No’ to a prayer request…if that is my testimony, then I have failed Him greatly.

2 thoughts on “Goodness of God”